Skip to content
Press Enter / Return to begin your search.
8.3/10 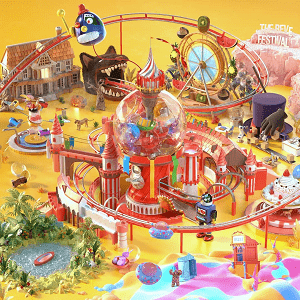 For the last three years, Red Velvet has been slowly placing themselves in the K-pop firmament as its reigning female group. With such a bold assertion, one could easily make the swift rebuttal that their contemporaries — TWICE and BLACKPINK — are the more worthy holders to the hyperreal genre’s coveted title.

But for all the remarkable success and achievements of the two groups, SM Entertainment’s very own has, without a doubt, carved out a safe distance from the comparisons with their own share of commercial success. The biggest outlier? The quintet’s unmatched consistency in quality.

On their newest track Zimzalabim, Red Velvet comes back with a high-octane display of their best qualities as a musical group — exuberance, experimentation, and the impassioned determination to explore uncharted sonical territories. After 2018’s ‘Really Bad Boy‘ divided fans over its apparent over-experimentation — nonetheless still proving to be a standout track among the group’s catalog of hits — Irene, Seulgi, Wendy, Joy, and Yeri have returned with a bigger and bolder track, seemingly unfazed by the lukewarm reception that preceded their comeback.

On Zimzalabim, Red Velvet comes back with a high-octane display of their best qualities as a musical group — exuberance, experimentation, and the impassioned determination to explore uncharted sonical territories.

With a percussion-heavy production by ‘Red Flavor’ producers Caesar and Loui, the song assumes multiple identities, splitting itself between each of these mutations to create a wildly discordant track that proudly revels in its incongruous elements to make for an enjoyable listen.

The song’s hypnotic incantatory chorus serves as an abrupt respite from the first three of these dynamic variations: the drum-and-chime introduction, the Major Lazer-like instrumental burrowing itself in the background, and the signature ebullience of the group’s famous Red pre-chorus.

Mixing the old with the new, the latter half takes us on a ride between the group’s soft and velvet-inspired bridge to an EDM dance break that touches on K-pop’s obsession with the standard fare.

On paper, incorporating these musical elements into one single track — clocking in only at 3 minutes and 11 seconds, no less — might seem like a quick recipe for pop music disaster, but Red Velvet’s embracement of the unknown permeates the entire song with undeniable charm, confidence, and the verve of eccentric showmanship.

Godrey is a twenty-something writer and professional pop star heckler based in Manila, Philippines. His likeness has been recognized by multiple international news and culture sites such as Billboard, Vice, and most notably, The New York Times in 2017 as being a "one vociferous account."